Last night Jesse Adams Stein joined Associate Professor Leanne Wiseman and Guido Verbist (The Bower), on ABC Radio’s Nightlife program, hosted by Suzanne Hill. (Listen to the full program here – fortunately our bit is in the first hour.) The type of interview is a nice format – a whole hour to discuss repair, the right to repair, and how design and law intersects with these issues. Callers rang in to discuss their frustrations with corporate monopolised control over repair industries and the problem of proprietary software. Automotive repair featured dominantly in this discussion which was interesting, as it’s often other kinds of objects that are highlighted (sometimes it’s kitchen appliances that take the focus). As always, iPhones were also the centre of some people’s outrage, no surprises there! Everyone has a story about broken things they tried to fix and couldn’t. These personal stories will be central to mobilising public engagement with repair and design issues.

It was also great to see our program was listened to by Nathan Proctor, Head of the Right to Repair Campaign (US) with the United States Public Interest Research Group (USPIRG). 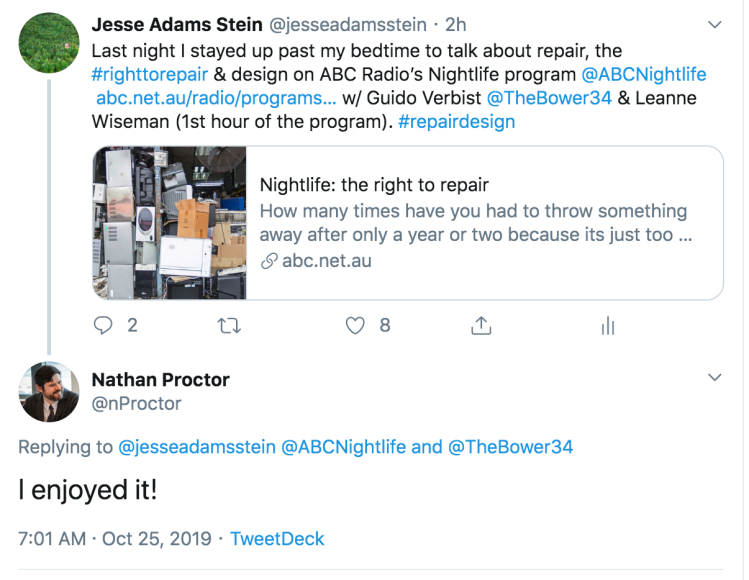 While Australian discourse on repair may be well behind the US – in terms of political advocacy and general public awareness of the legal possibilities for reform – there are also important differences jurisdictionally and culturally which will mean that any kind of ‘right to repair’ movement will play out differently in Australia compared to the US or the EU. As Guido said when leaving the ABC Studios after the interview – just wait, in a year’s time the political discourse about repair in Australia will be completely different.